Ancient Pakistan is a fascinating study of interaction among diverse cultures, languages, social systems and faiths. This interaction has imparted Pakistan a distinctive cultural identity that is essentially tolerant, pluralistic and accommodative. Watered mainly by Indus (Darya-i-Sindh) and its tributaries and bounded, inter alia, by majestic Himalayas, Karakoram and Hindu Kush ranges, shimmering Thar and Cholistan deserts, rugged hills and valleys of Balochistan and sparkling Arabian Sea, the land of Pakistan has cradled human habitations since the Palaeolithic Age.

Ideas, arts and crafts produced in ancient Pakistan were disseminated to adjacent countries and regions including South, Central and East Asia by preachers, soldiers, traders, students and scholars. It was the territory of modern Pakistan where experts set rules of as ancient a language as Sanskrit, developed elaborate standards, inter alia, of weights, medicines and town planning, produced exegesis of sacred religious texts and created art and crafts which remain most treasured part of Pakistan's rich cultural heritage.

About 25 kilometers from Islamabad, Pakistan's capital, flows the Soan, an ancient stream that gently raises its head at the foothills of Murree and winding through a tortuous path falls into Indus River near Kalabagh. At Rawat, within reaches of the Soan, researchers have found the oldest stone tools in the world dating as far back as 2.2 million years. Evidence of Palaeolithic culture was also recorded in southern Pakistan near Hyderabad, where a flint workshop was discovered at Ongar. The Sanghao caves near Mardan offer further evidence of contemporary human endeavours. Additionally, fresco paintings and engravings at the caves in Loralai and Musakhel illustrate the story of a prehistoric society in Pakistan. Many sites at Dhok Pathan, Kund, Morgah, Hyderabad, Rohri, Jamal Garhi and Khanpur belong to various stages of Palaeolithic as well as Mesolithic ages.

Neolithic or New Stone Age (6500 to 2500 BCE) marked the beginning of human settlements in Pakistan as well as domestication of useful crops and animals, building of shelters with burnt bricks and experimentation with ceramics. For the earliest farming, wheat and barley were used. The first such settlement existed in the eighth millennium BCE at Mehrgarh in Sibi. The settlement was established with simple mud buildings with four internal subdivisions. Numerous burials have been found, many with elaborate goods such as baskets, stone and bone tools, beads, bangles, pendants and occasionally animal sacrifices, with more goods left with burials of males.

Discovered by Jean Francois Jarrige and his team in 1974, experts found evidence of trans-regional trade as well as wheat cultivation at the site. The concentration of population in Kot Diji, Sindh and Rehman Dheri, Khyber Pakhtunkhwa led to the development of higher civilizations.

Indus Valley (3000-1300 BCE) is one of the four mature civilizations of the world. Across 250 acres on a series of mounds, Moenjodaro, its prime city was the most advanced in contemporary South Asia. The city was governed as a city-state as no evidence of kings and queens has been discovered either in Moenjodaro in Sindh or Harappa, another city of the civilization in Punjab.

Evidence suggests that these two cities had profound knowledge of city planning. Both had evolved a uniform system of weights and measures and made bricks whose dimensions were in proportion of 4:2:1 considered in line with the ideal strength of the brick structure. Buttons made from sea shells and ivory combs were in use besides bangles worn by females. The practice of dyeing also relates to Moenjodaro. Archaeologists have found private bathrooms at the ground floor of most houses highlighting the use of flush toilets.

Discovery of figurines of dancing girls made Sir John Marshal reflect, “When I first saw them I found it difficult to believe that they were prehistoric; they seemed to completely upset all established ideas about early art and culture.”
Similarly, it is said that the earliest plough (animal drawn) and rulers used in the world were by the Indus Valley people. Interestingly, rulers were made of ivory. In the same vein, knowledge about weights and measures used in Moenjodaro also gradually spread to Central Asia.

Indus Valley Civilization is also the first literate civilization of South Asia. Goods produced by it were exported to Egypt, Sumer, and Ur, a fact that informs its international connections and knowledge of the world outside its boundaries. Indus Valley inhabitants were given the name 'Meluhha' by the Babylonians because of their fondness for sea voyages. The dikes built by the Indus Valley people are believed to be the first in the world. The Rigveda, one of the four canonical texts of Hindusim composed approximately between1500 and 1000 BCE, describes Sindhu (Indus) as the cradle of civilization. Thee Ramayana mentions Sindh as part of the empire of Dasaratha.
Scholars from Harvard University, University of Wisconsin and New York University dealing with ancient civilizations in a project in collaboration with the Department of Archaeology and Museums of the Government of Pakistan, have opined that “a new study of artifacts” has revealed the presence of silk at the site of Harappa. This indicates the use of silk by the Indus Valley Civilization.

After Mehrgarh and Indus Valley, Gandhara is yet another landmark on Pakistan's archaeological landscape. Situated in the northwest of Pakistan, its boundaries extended to Lahore in the east of Pakistan and to the west into Afghanistan. Occupying a prominent position at a crossroads, Gandhara facilitated ancient Pakistan's international relations.
Rigveda mentioned Gandhara as a tribe. In historical literature, it was first mentioned as “part of the Achaemenian Empire” during the time of Cyrus the Great. Over the centuries, it developed into a place where contemporary scientific, political, social and religious ideas, as well as art and crafts of diverse lands met and influenced each other.
Taxila, the ancient city of Gandhara has been described as the wealthiest in contemporary South Asia. Its prosperity resulted from its position “at the junction of three great trade routes: one from eastern India, the second from western Asia; and the third from Kashmir and Central Asia.” It attracted distinguished preachers including Apostle Thomas and Apollonius of Tyna whose biographer Philostratus described Taxila as a fortified city that was laid out on a symmetrical plan and compared it in size to Nineveh.

King Ambhi of Taxila received Alexander the Great around 320 BCE. In the following seven centuries, Greek influence introduced classical traditions that became an important part of the Gandhara heritage. It is said that Mahabharata was recited for the first time at Taxila by Vaismpayana, a disciple of Veda Vyasa. Buddhist literature including Jataka mentions Taxila as a great centre of learning. Taxila was also visited by the famous Chinese monk Fa Hien in 405 CE. The city is mentioned in his travelogue titled A Record of Buddhist Kingdoms. Another well-known Chinese Xuanzang, also called Hieun Tsang, visited Taxila in 630 CE.

Analysts have expressed the view that the world's first university was established at Taxila. Called Takshashila University, it existed in the eighth century BCE. Analyst Janaka Perera opines that “this university, the world's oldest seat of higher learning” was in existence even before the time of the Buddha “and even before the Achaeminid rulers who occupied the Taxila valley in the sixth to fifth century BCE.” Scholars opine that Buddha had undertaken a visit to Sindh. It is said that given the extreme dry conditions, special permission was given by Buddha to his followers to wear shoes when they traveled in Sindh. Chandragupta Maurya, who later founded the Maurya dynasty, studied at Takshashila University. Chanakya (Kautilya) taught politics and diplomacy in the University where he wrote his masterpiece Arthashastra. It is said that Charaka, the famous ayurvedic physician who wrote Charaka Samhita was a product of
Takshashila University. Atreya taught medicine and surgery at Taxila. Scholars have emphasized that Greek populace in the Mauryan Empire converted to Buddhism after Asoka (304-232 BCE), a grandson of Chandragupta, became a
Buddhist. In the context of Hellenic indluence, a reference could be made to the Kailash people in Chitral, who may well be the direct descendants of the soldiers of Alexander.

Under Asoka, Buddhism became the most popular faith in ancient Pakistan. The Mankiala Stupa near Rawat is an important Buddhist site. According to a legend, Buddha at this place “sacrificed some of his body parts to feed seven hungry tiger cubs.” Scholars believe that the “entire area from Peshawar to Gabral and the entire Dir Valley were stupa-studded.” There were “hundreds of monasteries” throughout these valleys. Now in advanced stages of decay, the remnants of such monasteries can be seen at many places in Pakistan including Mardan, Jamalgarhi, Shabazgarhi, Charsadda and Takht-i-Bahi.
Guru Padmasambhava, also known as Guru Rinpoche (the Precious Guru), was born in Swat which is not far from Islamabad. Considered as the 'Second Buddha', he is highly venerated in the entire Himalayan region especially in the Tibet region of the People's Republic of China, and Bhutan. In his youth, Asoka, served as the Governor of Taxila. His son Mahindra, and daughter Sanghamitra, preached Buddhism in Sri Lanka, from where this religion is said to have spread to East Asia including Thailand.

After Alexander and his Indo-Greek satraps, many other groups took control of Gandhara including Sakas, Parthians, Scythians and Kushanas. The great Kushanas took keen interest in developing Gandhara into an important Buddhist center under Kanishka during the second century CE. The period of prosperity ended with devastating Hun or Hephthalite attacks during the fifth and sixth centuries setting in gradual decline of this great culture.
History places Pakistan at a central position on the world heritage map. The unique geography and cultural diversity of the country have shaped it as an inevitable forerunner of great cultural and political movements across South, Central and East Asia. While writing about ancient Pakistan, renowned scholar, Mr. Mukhtar Ahmad aptly remarked, “It is to this unique region that we owe much of our élan in South Asia.” In line with a great tradition, Pakistan remains a prime proponent and promoter of regional integration and connectivity as well as a culture of tolerance and accommodation for all. In fact, these are the most prominent traits of our ethos. 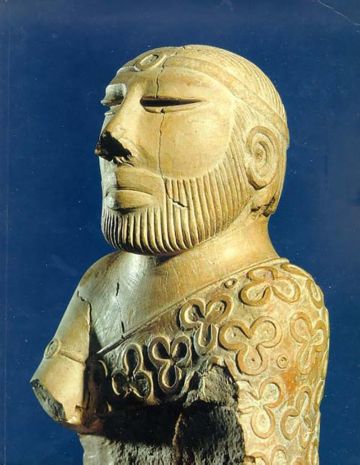 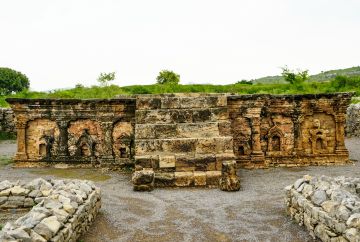 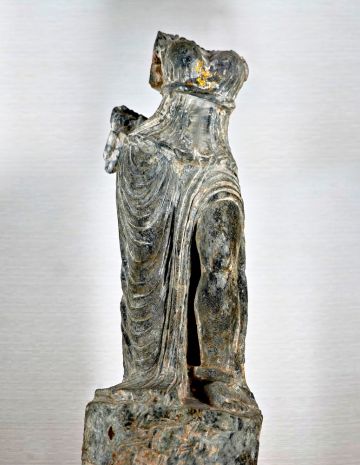 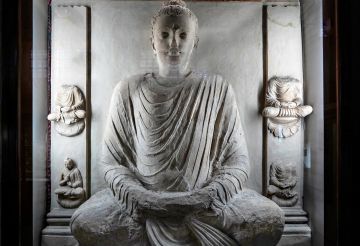 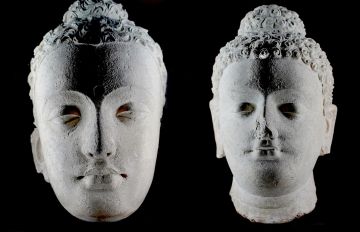 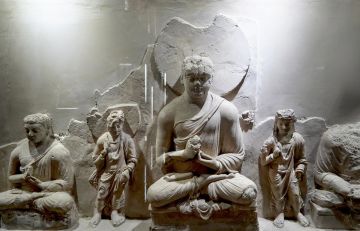 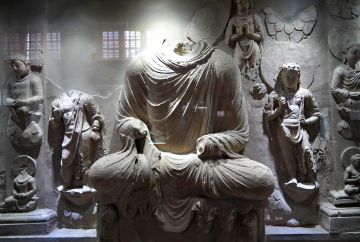 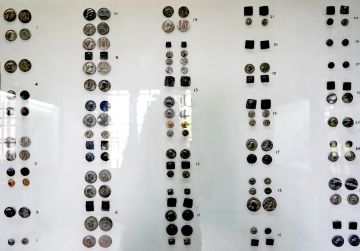 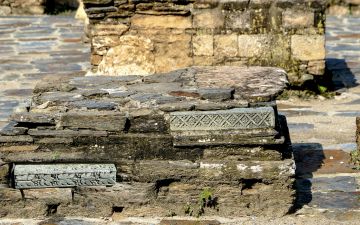 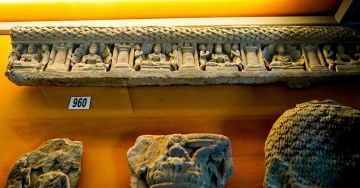 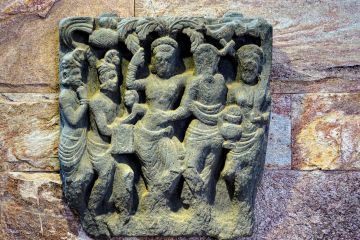 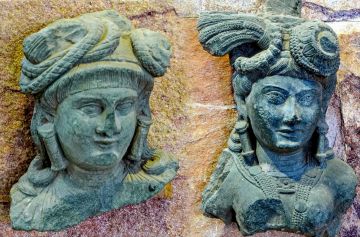 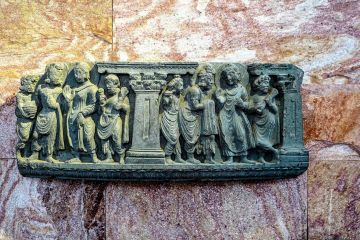 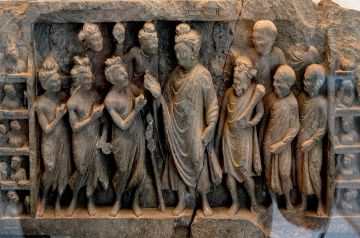 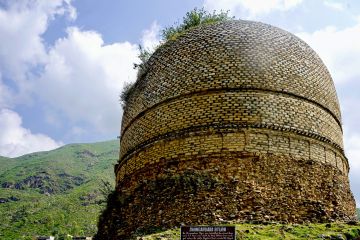 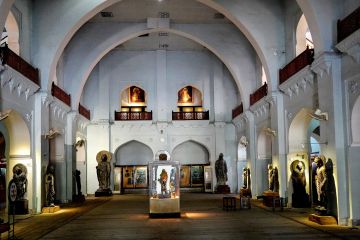 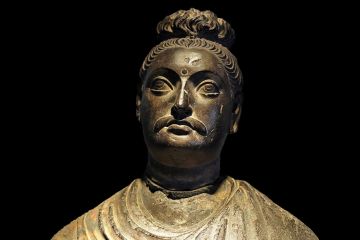 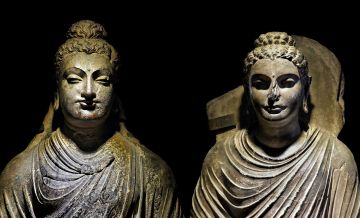 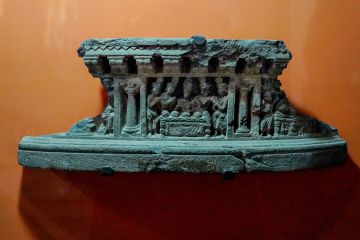 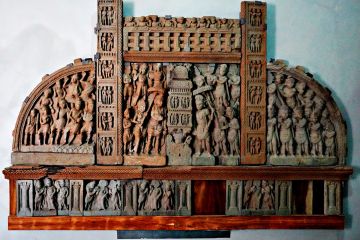 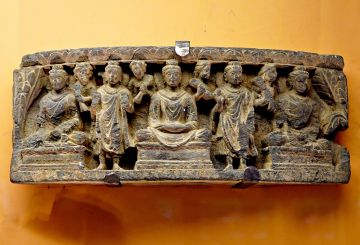 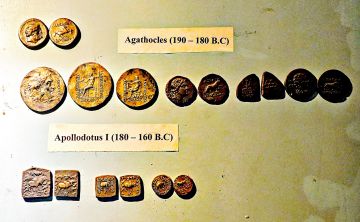